India’s first non-stop solo sailor Lt Cdr Abhilash Tomy arrived at the Gateway of India in South Mumbai on Saturday, 6th April’13, after completing the Sagar Parikrama-II expedition around the world.  With the Navy having made preparations to accord a grand welcome to Lt Cdr Tomy on his arrival in Mumbai, Defence Minister AK Antony, Navy Chief Admiral DK  Joshi,  Flag Officer Commanding-in-Chief, Western Naval Command and Vice Admiral  Shekhar Sinha joined the President in receiving the new sailing icon. Along with them were thirty plus sailboats to receive him as he enetered the Mumbai Harbour. The Sail Parade was organized to welcome & ‘sail in’ the iconic boat INSV Mhadei and her Skipper on this historic occasion from Prongs Reef Lighthouse to the finish line off the Gateway of India. 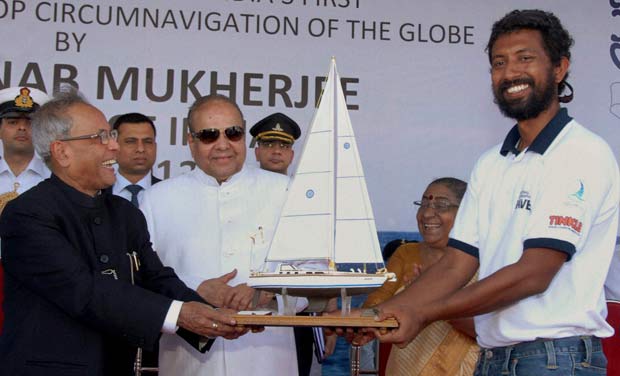 Lt Cdr Tomy had set sail from Mumbai on November 1, 2012 as part of the Sagar Parikrama-II non-stop solo expedition in a 17 meter sail yacht named INSV Mhadei. Cdr Dilip Donde had taken INSV Mhadei around the world in 2009-10, with four stops, to become the first Indian to circumnavigate the world in a sail yacht. Tomy, a maritime reconnaissance Dornier pilot by specialisation was inspired by his mentor Cdr Donde, in taking up this adventure. He however, decided to do one better by undertaking a solo, unassisted, non-stop endeavor. When he returned to Mumbai, he covered a distance of 22,967 nautical miles without stopping at any port. On completing his 150 day voyage, Abhilash 34, became the first Indian, 2nd Asian and 79th sailor globally to complete such a voyage. 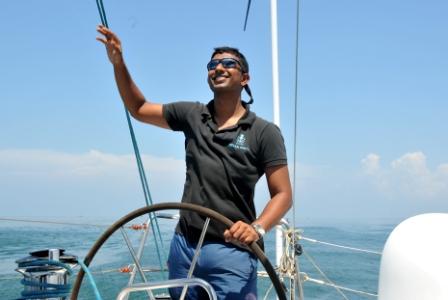 India has many firsts in the sailing hcg diet doctors world to be proud of. Built in India on a slipway in Bombay Docks in 1963 using teak throughout, Suhaili was the first sailboat to ever sail non-stop around the world. In the eighties, circumnavigation became fashionable. The first circumnavidation by the India Navy was in a boat named Trishna. From 1985 to 1987 she was on a circumnavigation westward via the Panama Canal.

The expedition also led to the setting of a world record with Major A.K. Singh becoming the first handicapped sailor to circumnavigate the globe. On the 6th of April, twenty-five years later, the crew, led by then Major K S Rao (who subsequently retired as Lieutenant General), relived the moment as they set on a ceremonial sail on the same foot-sailing yacht Trishna. Sail-worthy even after so many years, Trishna was also present as part of the sail parade that welcomed Abhilash Tomy.

The Mission: Sail around the world. The conditions for calling it a solo non stop
unassisted voyage is :-

Journey Completed on: 6th April 2013, a proud moment for India!

Stay tuned for more updates and coverage on Abhilash Tomy’s commendable journey. We at India Yacht Page salute him for his achievement.