If you want to know your soul, you must experience sailing. In our interview with Lt Cdr Abhilash Tomy, 1st Indian, 2nd Asian & 79th Sailor to Non-Stop Circumnavigate – solo, we bring you a few comments from the sailor himself. He set sail from Mumbai on November 1, 2012 as part of the Sagar Parikrama-II non-stop solo expedition in a 17 meter sail yacht named INSV Mhadei. Tomy, a maritime reconnaissance Dornier pilot by specialization was inspired by his mentor Cdr Donde, in taking up this adventure. The solo, non-stop, unassisted voyage meant that he had to sail a distance equal to the length of the equator- 21600 nautical miles, cross the equator twice, sail south of all the great capes- Cape Leeuwin, Cape Horn and Cape of Good Hope, take no assistance enroute, cross all meridians in the same direction and start and finish at the same port. Here’s what Lt Cdr Abhilash Tomy shared with us.

For how long did you train before taking up the Sagarparikrama mission II? Tell us a little about the training.
The training specifically for SP 2 lasted from 2009 till 2012. I worked on the boat as the assistant to Cdr Donde during his solo circumnavigation and was his lone shore support in India and during his stopovers abroad. I sailed on this boat with him to Colombo and Mauritius prior SP1 and to Cape Town and Rio under Cdr Donde and a crew post SP1. I sailed from Rio to Cape Town with a single crew and from Cape Town back to India solo. I also sailed a voyage from Goa to Malaysia/ Thailand and back in 2012. So the sailing preparations itself was about 27000 nautical miles.

What was the greatest thing you experienced during your journey?
I loved the solitude and saw how insignificant our lives are compared everything else around us.

What was the most difficult thing you endured during your journey? Did you ever think of quitting?
The most difficult day would be the day I rounded Cape of Good Hope when I was hit by a 70 knot gale that lasted for hours. It tore a genoa and looked strong enough to dismast the boat. I never thought of quitting!

What did you do when you were bored?
I was bored only on one day out of 150. I just let the day pass.

Tell us about your day’s routine.
I would sleep about 5 -6 hours a day in 30 min – one hour stretches. The sleep pattern is called poly-phasic sleep. On a usual day I would start with half an hour meditation in the morning. By 7 I would get the weather report and pour over the weather charts and predictions for at least an hour. By 8 I would be making my morning report to the naval headquarters. That would be followed by the first meal of the day. Then a walk around of the boat during which I would look for defects and plan work for the day. I would usually try to complete all work during daylight hours. At noon I would make a set of nautical observations. That would be followed by lunch and work on the boat. By evening 6 I would be preparing the boat for the night. At 7 PM I would get the second weather report and then the last report for the day would be made at 8 at night

What devices did you carry with you to keep you connected with civilization?
I had a laptop that was connected with the rest of the world through satellite internet. We had INMARSAT Mini C terminal and SPOT personal tracker too. 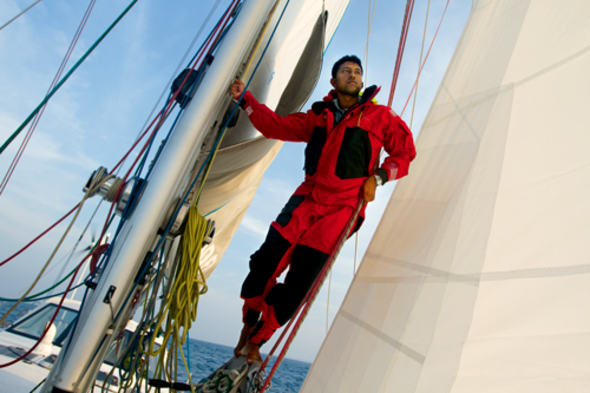 Would you take up the challenge again?
Possibly not just because I have already done it once and I have ” cracked the code”. But maybe yes if it involves something more difficult like a race.

Besides sailing, how do you like to spend your time?
I do watch movies, love cycling, a bit of swimming and I do read a lot of books.

What is your advice to future sailors who take up a similar challenge?
Once you have decided on doing something like this, don’t look back!

“The geography of the sailor is not always the one of the cartographer, for whom a cape is a cape with its longitude and latitude. For the sailor, a great cape is both very simple and extremely complex, with rocks, currents, furling seas, beautiful oceans, good winds and gusts, moments of happiness and of fright, fatigue, dreams, aching hands, an empty stomach, marvelous minutes and sometimes suffering. A great cape, for us, cannot be translated only into a latitude and a longitude. A great cape has a soul, with shadows and colors, very soft, very violent. A soul as smooth as that of a child, as hard as that of a criminal” – Bernard Moitessier.

We at India Yacht Page, on behalf of our readers,  thank Lt Cdr Abhilash Tomy for sharing a few words with us and congratulate him once again for his spirit of adventure and endurance.