Indian Naval officer Commander Abhilash Tomy, the only Indian to sail around the world non-stop and solo, is ready for his second solo circumnavigation. He will sail ‘Thuriya’ around the world in the historic ‘Golden Globe Race’ which will be flagged off from Les Sables d’Olonne, France on July 1st 2018. The 30,000-mile Golden Globe Race has 18 skippers at the start line and CdrTomy of the Indian Navy is a special invitee. The 50th anniversary edition of the Golden Globe Race is a celebration of the original event. Competitors in this race will sail in conditions similar to 1968, without modern navigation aids. The race is being held to commemorate 50 years since it was held for the first and last time, which saw Sir Robin Knox-Johnston’s successfully completing the voyage in 312 days, to become the first human to finish solo, unassisted and non stop circumnavigation of the world. 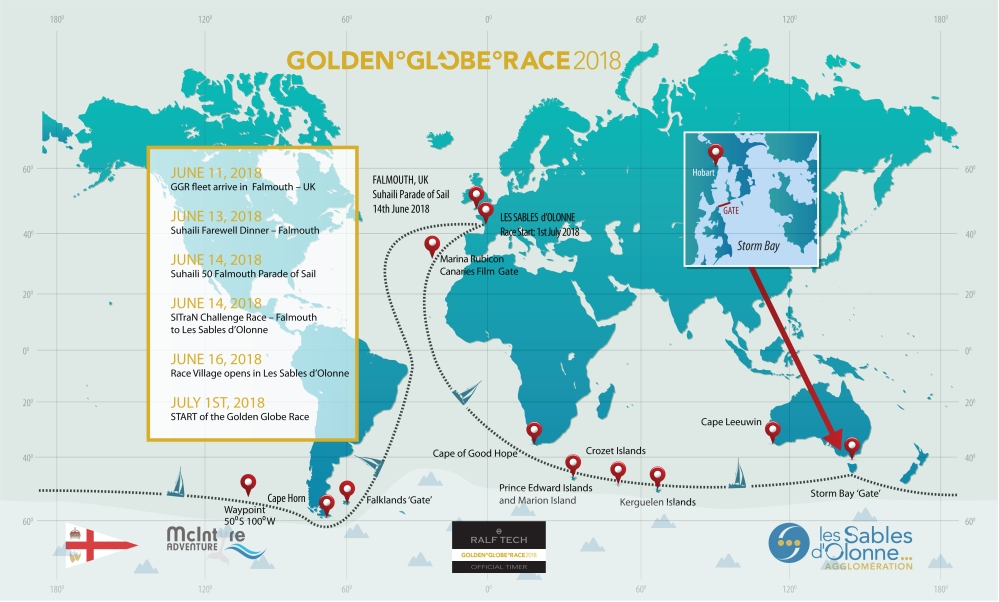 The challenge is pure and raw. It is for ‘those who dare’, just as it was for Sir Robin Knox Johnston. The biggest challenge at the GGR is to have equipment, tools and boat which resembles the one used by Sir Johntson,despite the change in technology. Navigation will have to be done looking at celestial objects using physical maps, sextant on paper charts, without GPS or other electronic instruments or autopilots; not even pocket calculators.. Communication with the outside world will also be limited as the lone satellite phone is for use in medical emergency alone. Participants will hand-write their logs and determine the weather for themselves. Only occasionally will they talk to loved ones and the outside world, when ham radios allow.

Starting from Les Sables d’Olonne, skippers will go south to Cape of Good Hope, continue sailing eastward in the southern hemisphere to pass the international dateline, and pass Cape of Horn to start sailing north in the Atlantic Ocean for the final leg. Cdr Tomy is aiming to complete the race in 311 days, one day less than Sir Johntson’s timing. He will be sailing the 10-metre ‘Thuriya’, whose design is similar to Sir Johntson’s boat ‘Suhaili’, which was incidentally manufactured in Colaba, Mumbai. “Thuriya” has been built in Goa at Ratnakar Dandekar’s Aquarius Shipyard. Cdr Tomy has supplies consisting of specially-prepared food items and fresh water in the limited space on board.

Explaining the journey that awaits him, CdrAbhilash said, “At the Sagarparikrama (the first circumnavigation), I had used GPS-based maps and other satellite-based technologies. But at GGR, I have to make do with a compass, printed maps and stars and planetary movements. There is a solitary HF radio set for contact. The size of the boat limits the possibility to carry water. Sir Robin had collected rain water and used it, I will have to do the same. There is no help from the outside world throughout the race.” 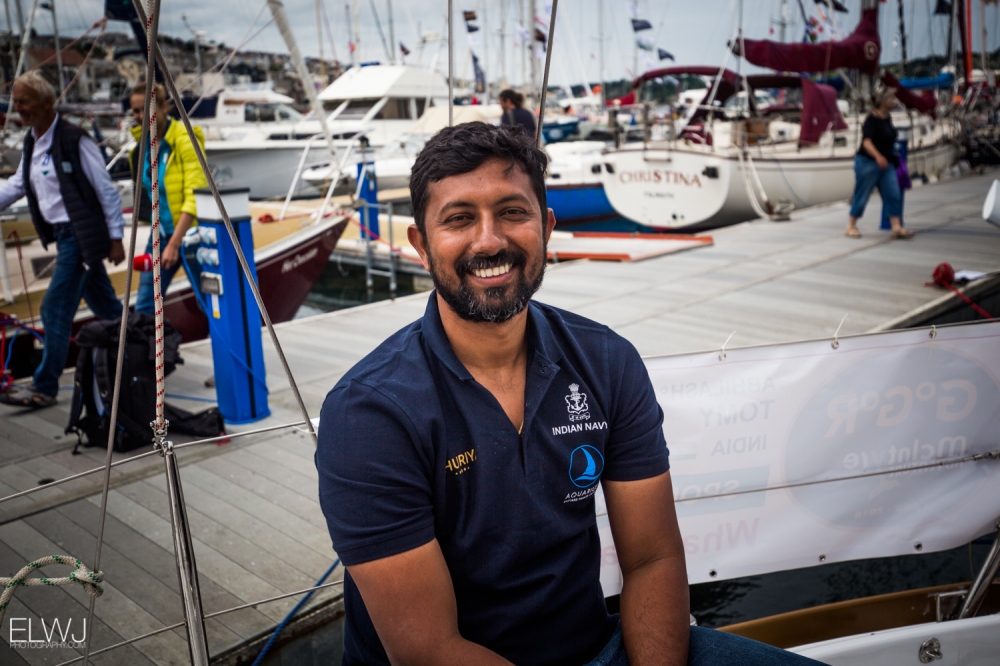 Here is a quick QnA with CdrAbhilash:

1. Where are you now? Plan / schedule for next 8 days?
I was in a place called Medemblik in the Netherlands preparing the boat for the circumnavigation. I sailed out from there on the 5th of June alone and made it to Falmouth in the UK by the 10th of Jun. I was there as part of the Golden Globe Race (GGR) race activities such as race briefing etc. I left from there on the 14th morning and reached Les Sables d’Olonne, France on 17th June. The sail to Les Sables was with all the other entrants. There was a friendly race called the SITRAN cup.

The GGR race will start from Les Sables on 01 Jul. During our stay in Les Sables for next 10 days, we will have safety briefings, safety inspections, media, introductions, events etc. and of course boat preparations.

2. About Boat & other preparation, what is done, what is pending
Most of the work is done. We had the first safety check yesterday and a few things needed to be looked into as per the race organisers. Buying food is pending. And also buying some stuff such as stationary, toiletries etc.

3. What are you carrying with you for this expedition
Lot of things are to be carried! It is an endless list.
– Almost 1000 meals, including MTR, freeze dry and tinned food
– A suit of 13 sails
– Two sextants
– Two taffrail logs
– Two automatic watches
– Three trackers
– Two satellite phones
– Lot of charts
– Lot of books
– An MF direction finder
– Two Short wave radio sets
– Lot of communication equipment
– Four 10 kg gas cylinders
– Lot of spares for the engine etc
– About 300 litres of water
– About 140 litres of fuel

There is also a major emphasis on safety due to which we are taking a lot of safety equipment with us. This is almost four times more than what i carried in my last round the world. There is also a lot of emphasis through regular briefings, safety checks etc from the organisers. MSOS will be providing the medical support while we are at sea. 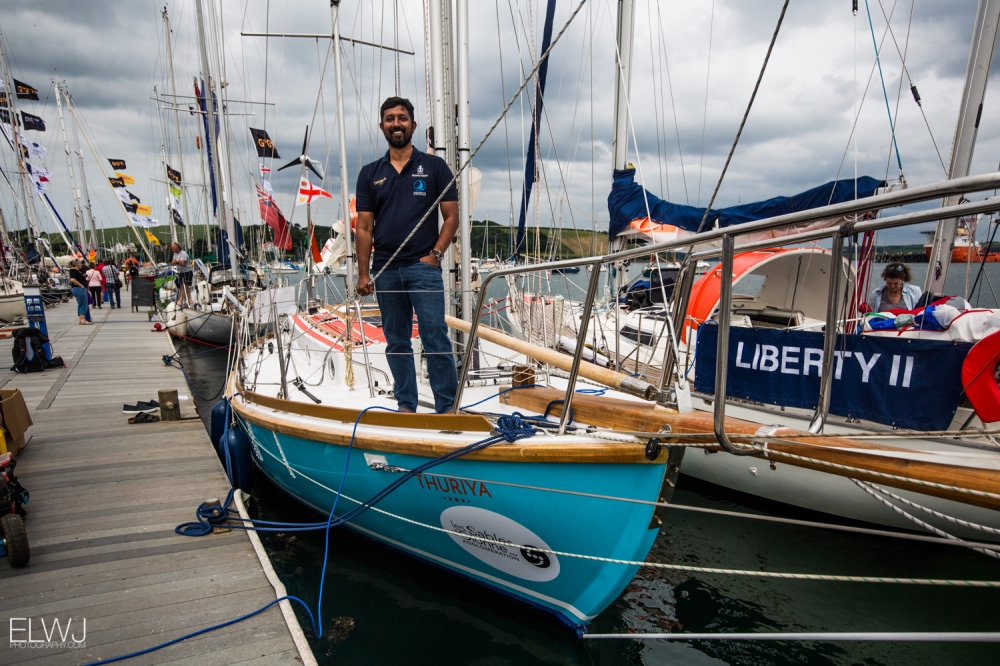 The Sunday Times Golden Globe Race (GGR)in 1968 was the first solo and non-stop race in the world. Sir Robin Knox-Johnston from the UK, onboard the Bombay-built ‘Suhaili’ was the only person to complete the race. Half a century later, the race will be conducted again in 2018, with the same rules and only the technology available during the first race. The rules of GGR-18 allow onlyclassic production boats between 32 to 36 feet to participate. At least 20 production boats should have been built from the same mould for a boatto be eligible to race.However, an exception is made if a new boat is a replica of the ‘Suhaili’.

Thuriya’s Vital Statistics
> Length overall – 32 ft
> Length at waterline – 27.5 ft
> Beam – 11 ft
> Draft (min. depth of water required to float) – 5 ft
> Freeboard (height of gunwale above sea level) – 2 ft to 4.5 ft
> Displacement – 19,500lbs (8,845kg)
> Material – Wood core laminated with epoxy and fiberglass
> Sail Plan – Jib-head sail plan giving a sail area of 726 sqft
> Design – Bermudan Ketch based on plans designed by William Atkins for Eric in 1923, which were based on a typical Colin Archer Norwegian lifeboat design of the type used by the fishermen and pilots of the North Sea. The design’s claim to seaworthiness is based on her classic combination of heavy displacement, a long keel, and good diagonals. The design features detract from speed, but are aimed at survival and utility in violent short seas. In short she is a very good boat for very bad seas.

Thuriya has been built by Aquarius Shipyard, Goa under the guidance of MrRatnakar Dandekar. Construction commenced in March2016. The hull was launched in Aug 2017 and the boat began her sail trials towards the end of 2017. In March 2017 she was shipped to Medemblik in the Netherlands where work on the boat was completed and she was supplied with a new suite of sails. On 5 Jun Abhilash sailed her alone through the North Sea and the English Channel to Falmouth, England, for preparatory activities for the Golden Globe Race. Considering her importance, the Thuriya was moored on the same pontoon as two other iconic boats- Sir Robin Knox-Johnston’s Suhaili and Sir Francis Chichester’s Gypsy Moth IV. 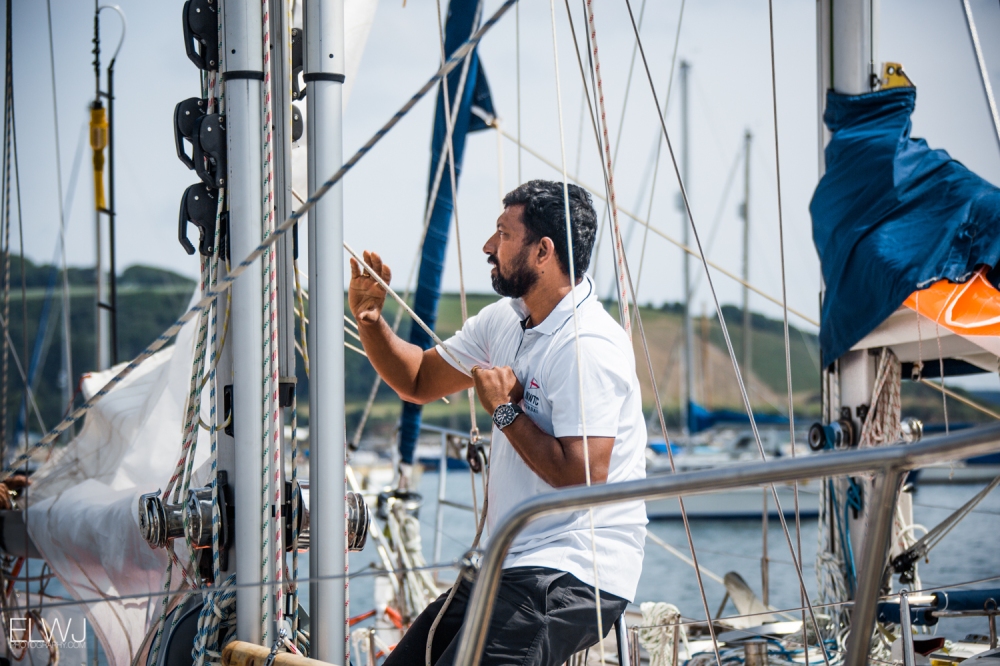 To put it in a nutshell, the GGR is about the ‘Last Man Standing in an Epic Endeavor’.

In August 1966, after British yachtsman Francis Chichester sailed solo around the world from England to Sydney, Australia, and back via the five great Capes in the ‘Gipsy Moth IV’ in 226 days,there was just one last ocean sailing challenge left: To sail solo non-stop around the globe. In March 1968, The Sunday Times Golden Globe Race was announced. There was no entry fee, virtually no rules nor qualification requirements. It offered a trophy for the first person to sail solo non-stop around the world via the five great capes, and a £5,000 cash prize for the fastest time. Nine sailors with varying sailing skills headed off at various times in a strange collection of yachts. There was only one finisher – Robin Knox-Johnston and his 9.75m traditional ketch-rigged double-ended yacht ‘Suhaili’ who, at the start, was considered the most unlikely boat and given no chance. The rest either sank, retired or committed suicide. The Sunday Times Golden Globe Race quickly became legend to sailors and non-sailors alike with its triumph and tragedies and epic human endeavor in facing the unknown. It remains so today. The 50th Anniversary edition will launch on 30 June 2018 from Plymouth, England. India’s only entry is Cdr Abhilash Tomy in ‘Thuriya’.

IndiaYachtPage.com wishes him success and a safe and speedy voyage!